One Pass, One Price, All of Kingston

Fort Henry was built from 1832 to 1837 to replace an existing fortification from the War of 1812 era. Situated atop Point Henry, the Fort protected the naval dockyard at Point Frederick, the entrance of the Rideau Canal and the town of Kingston, which was the major transshipment point along the supply route between Montreal or Ottawa and all points west. 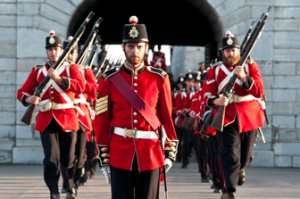 Today, Fort Henry continues its role as a museum and historic site to residents of Kingston and visitors from all around the world. Once inside the wooden gates, visitors enter the realm of 19th-century military life, experience guided tours, scenic views, heart-pounding musical performances and precision military demonstrations by the Fort Henry Guard* (a highly disciplined group of university student recruits trained as British soldiers from 1867). You will also see people representing the civilian population of the Fort as schoolteachers and soldiers’ wives. The Fort also plays host to numerous special ceremonies and events that take place all season long.

*Fort Henry Guard has no connection to either the Royal Military College or to the modern Canadian Armed Forces.

Entrance to this attraction is included in the K-Pass!
For more information planning your trip, visit: www.forthenry.com